4A11 and 4032 are Al-Si-Cu-Mg series Forged aluminium alloys. They are both forged and cast aluminium alloys. They can be strengthened by heat treatment. It has the advantages of small coefficient of thermal expansion and good wear resistance. It has good heat resistance, fatigue resistance and low temperature mechanical properties. It has good plasticity in hot state and good corrosion resistance.
4A11 and 4032 aluminium alloy forgings are mainly used to manufacture materials for piston and cylinder of steam engine, as well as complex forgings working below 200 C and bearing heavy loads.

For complex or heavy forgings, the water temperature during quenching can be increased to 65-80 ℃ to avoid the deformation of forgings, but the mechanical properties will decrease.
Generally, the transfer speed during quenching should not exceed 10 s. For heavy forgings, the transfer speed should not exceed 15 s, so as to avoid affecting the mechanical properties and corrosion resistance of the alloy.
The two alloys have good plasticity in hot state. They are suitable for extrusion into bar and various interface profiles, and for making various forgings.


5A02 alloy has low strength and high plasticity. Cold deformation can improve its strength, but it will reduce its plasticity. It has good properties of hydrogen atom welding, contact welding and friction stir welding. It can also be gas welding and has high corrosion resistance. In aircraft manufacturing, welding under moderate loads requires high process plasticity and corrosion resistance components, such as pipes, liquid containers and sliding frames, and also used to manufacture airplane mailboxes and conduits, welding wires, rivets and ship structures.

The melting temperature and casting temperature of 5A02 are 700-750 ℃and 690-730 ℃ respectively. Alloy wires are used as solders and rivets. The machinability of 5A02O is not good, and it is improved under the condition of cold work hardening. The surface treatment process of 5A02 is similar to that of other aluminium alloys, but much worse than that of 6063 alloy.

In aircraft manufacturing, the alloy is usually used to manufacture parts with high process plasticity and corrosion resistance, as well as welded pipes, liquid containers, welded structural parts, aircraft skin skeleton and so on.

5A06 alloy has the highest Mg content (6.3%) and the highest Mn content (0.65%). The average total content of Mg and Mn reaches 7%. Because of its high strength, relatively low plasticity, good corrosion resistance and weldability, it can be processed into plates, tubes, rods, profiles, wires and forgings, die forgings, etc. It has been widely used in aviation, aerospace, missiles, ships, automobiles, tanks and other industries. Mainly used for welding structure, cold forging parts, stress parts of welding vessels, aircraft skin skeleton parts and rivets. 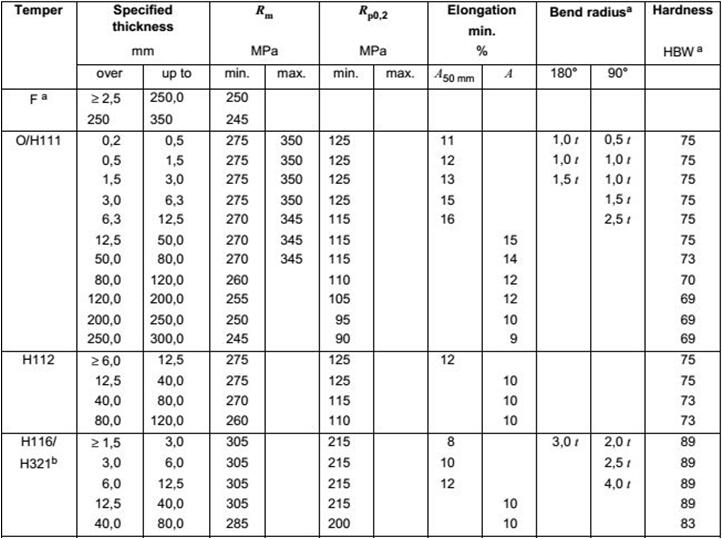